COMMUNITY IMPACT: Austin is the Best Place to Live in the US

The city of Austin took the No. 1 spot on the 2017 list of the annual U.S. News & World Report’s Best Places to Live. Last year, the report named Austin the second-best place to live in the US.

Austin bumped reigning city Denver to the No. 2 spot, with San Jose, California claiming the No. 3 spot. 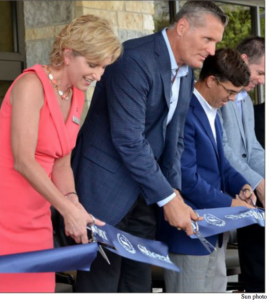 CAN NEW SHERATON BE ‘GAME-CHANGING PROJECT’ FOR GEORGETOWN?

Austin, Texas – A new luxury hotel in Georgetown is expected to help lure more conventions – a lucrative sector of the travel industry that officials say has largely bypassed the city in recent years.

Two developers – Hines and Novak Brothers – teamed up to make the project a reality.

Previously, Georgetown didn’t have much in the way of higher-end lodging options, Novak Brothers founder and CEO Jeff Novak said, prompting companies to hold their functions in nearby communities, such as Austin and Round Rock.

The city’s other hotel options include a Hampton Inn & Suites, a Holiday Inn Express & Suites and a Best Western Plus, among others.

“Where could we host corporate executives? They’d end up at a limited-service hotel,” Novak said. “There’s nothing wrong with those hotels, but that wasn’t the experience we were looking to sell. Now, we’ve set a new standard of service and luxury in Georgetown.”

Aside from the meeting and event space, the Sheraton’s other amenities include a heated outdoor pool and fitness center.

The Georgetown Convention and Visitors Bureau plans to step up its marketing efforts now that the Sheraton is up and running, tourism manager Cari Miller said.

“With the addition of the new hotel and conference center, we can now promote Georgetown as a meeting and conference destination,” she said. “Georgetown … is the perfect location for a wonderful meeting experience.”

The hotel is part of a larger development, called The Summit at Rivery Park, that will include residential, retail and entertainment components. Georgetown Mayor Dale Ross calls it a “game-changing project” for the city.

“This project is positioned for the highest level of success,” he said.

In its first week of operation, Sheraton general manager Rita Healy said the hotel is already being embraced by tourists, as well as area residents eager to check out its food and drink options: Jack’s Lounge and Brix and Ale. 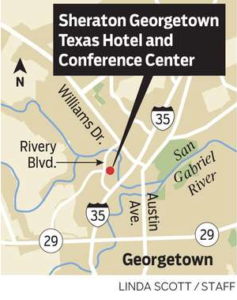 Brix and Ale serves breakfast, lunch and dinner, while Jack’s Lounge features an assortment of wines and craft cocktails.

“I truly believe we have something for everyone,” said Healy, who arrives in Georgetown after a stint at a Westin resort in Tucson, Ariz. “It’s been great to finally welcome guests into the building, to see their smiling faces in the lobby and to hear their laughter in our lounge. Everything so far has been amazingly smooth.”

So smooth, in fact, that Novak says he’d like to open similar hotels elsewhere.

“My brother and I are more proud of this than just about anything we’ve done,” he said. “It blows my mind every day when I’m driving on the freeway and see it. I’m super proud of it.”

THE FIRST FULL-SERVICE HOTEL IN GEORGETOWN, TEXAS, OPENS ITS DOORS TO THE COMMUNITY

“Texas is one of the top destinations for both leisure and business travelers alike, and an important market for the Sheraton brand to continue its growth in,” said Bob Jacobs, Vice President of Brand Management, Sheraton North America. “The opening of Sheraton Georgetown Texas Hotel & Conference Center underscores our focus on continuously enhancing our portfolio with even more compelling options for our guests and is a valued asset to the brand.”

Featuring an upscale, Lone Star-inspired design, with rich wood accents and vibrant color palettes, the hotel aesthetic captures the charm of Georgetown with paintings and sculptures from local artists displayed throughout the building. The hotel’s stylish and cozy guest rooms are each equipped with all of the Sheraton brand’s signature amenities and services, including a premium sleep experience. The property also features a heated outdoor pool, fitness center and the Sheraton Club Lounge, which offers complimentary breakfast, beverages and evening hors d’oeuvres for Sheraton Club guests.

The uniquely designed Lobby Lounge serves as an open hub for meeting, eating and connecting. During the day, the Lobby Lounge offers a relaxed setting to work and mingle. In the evening, it transforms into a social atmosphere with the Lobby Bar featuring Sheraton’s signature Paired program with premium wines by the glass and local craft beer. The hotel’s signature restaurant, Brix And Ale, serves classic comfort cuisine, complemented by a carefully curated menu of local wine, beer and cocktails. Additionally, guests can enjoy 24-hour room service.

The conference center offers a range of layouts and pricing options flexible enough to accommodate events of all sizes, from small social gatherings to extravagant weddings and corporate meetings. The center boasts 30,000 square feet of functional meeting space, including a 16,000-square-foot ballroom with 10 distinct sections, and four breakout rooms including a state of the art boardroom.

“There is no doubt this is a game-changing project for our city,” said Dale Ross, Mayor of Georgetown. “Sheraton Georgetown Texas Hotel will allow us to introduce the Most Beautiful Town Square in Texas, our park system, and other places that make our city unique to visitors outside our region. This project is positioned for the highest level of success and we couldn’t be more excited to have this first-class facility located in Georgetown.”

Sheraton Georgetown Texas is located about 27 miles north of Austin and anchors The Summit at Rivery Park, a new upscale residential and entertainment district. Guests can enjoy convenient access to shopping and dining in Georgetown’s Town Square, the most beautiful square in Texas. Visitors can also explore a wide variety of nearby recreational activities, such as local wineries, preserved caves and accessibility to a gorgeous nine-mile hiking and biking trail on the bank of the San Gabriel River.

To celebrate the grand opening, Sheraton Georgetown Texas is offering a discount of 15% off select rates, plus 500 Bonus SPG points for stays through September 30, 2016. Guests should reference the Grand rate offer when making reservations online or by calling 800-477-3340.